In the next several blogs I will be sharing the process I've walked with Adderall and some perspective, realizations, and research that I have found in relation to ADD and ADHD. 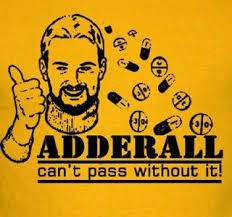 
When I took Adderall, I experienced alertness, sociability, happiness, irritability, a significant weight loss, a rush of relief and a general feeling of being able to make it through my day and be okay.

The Problem of Adderall

I decided to stop taking Adderall for many reasons with the most important being that the drug was not supportive for my physical body and there was an increased risk of speeding the aging process and developing Parkinsons disease later in life.  When I made my decision, I was at a point in my process where I saw that it was time for me to choose whether or not I was going to use my time here to the best of my physical and mental ability and whether I would be a part of Life or not.  I chose to be here for as long as possible and to not speed up the process of death so that I could be a part of the change for a New World. Additionally, I had become addicted to the drug as I had convinced myself that I could not function normally in the world without it.

I took 1-2 pills per day on-and-off for about 3 years.  After I had made my decision and my bottle of pills was low, I began taking 1/2 of a pill twice a day and then 1/2 to 1/4 once per day until the bottle was empty.  I did not call in to have my prescription re-filled.  It was within this time that I began assisting and supporting myself with writing, Self-Forgiveness and Self-Correction.  I also was given full support as well as an education about Addiction via my Desteni I Process lessons.  When and as other points related to desiring Adderall emerge, I get support, I work on my self-realization process, I refine my self-correction, and I apply myself.

Because I am no longer accepting and allowing myself to be dependent on the drug or tell myself that I require the drug to survive in this world, I no longer make excuses, justifications and reasons for my continued use of a substance that is harmful to my physical and mental health.  This self-limitation is being removed.  I no longer experience the side-effect of irritability with myself because I made a self-honest decision that was best for myself and who I would like to be.  I am no longer taking a chemical that makes everything feel good or that fixes what I see as problems - instead, I am facing the points that come up and supporting myself with investigation, asking questions, testing answers, writing, self-forgiveness, and self-correction.

In the following posts, I will be sharing what's been walked so far.