Day 226: Regret (and other emotions) Supports Me To Change 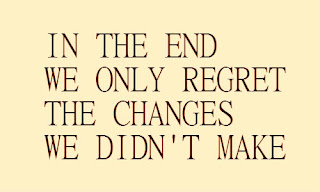 I commit myself to when and as I see something is not working, to do something about it.

I commit myself to stop making threats - to stop threatening to change things - and to instead move myself to change.

I commit myself to stop myself from prolonging situations that aren't improving nor aligning with the way that is best for me to be living with by when and as I become aware that things aren't working nor in alignment with what's best, I will no longer attempt to reason, justify, explain away, or ignore it.  I will instead sit down with myself, clear myself of reactions, decide on an action that is best, and then move on the decided change.

I commit myself to be my own change and to no longer to anticipate, hope, or expect others to be that change for me.

I commit myself to stop going into 'self-sacrifice' as have become aware that this personality and other similar to it, is a farce and an attempt to be something that hides something else about me that I have not wanted to face and change.

I commit myself to stop holding onto memories and times when things are 'okay' or 'good' by reminding myself that if things were actually 'good' or 'okay', they would always that way and would not go to the opposite polarity of being shit.  Additionally, when and as I see myself looking for the 'good times' and telling myself that things are or will be okay, I stop, breath, and look for the point that I am attempting to ignore or suppress and then re-direct myself to face it.

I commit myself to stop myself from allowing my fear of the unknown to influence my decisions by when and as I am in the process of making decisions, I will direct myself to make sure that I am clear on this point - and within this, also to remind myself of the potential within/as the unknown!

I commit myself to stopping fearing regret and fearing the potential that I may regret the decisions that I make.  The reality is that this is not the first nor the last time that I have become regretful - it's a part of me living, making changes, and fine-tuning. With regret, the point for me is to utilize it for my awareness to not repeat the same mistakes and patterns again.

I commit myself to stop fearing change by when and as the fear of change comes up in response to a changing situation or a situation the requires my direction to change, with all of the 'What ifs ...', thoughts, future projections, beliefs, and backchats come up, I stop, breath, self-forgive what's coming up then give myself time to look at the situation in a disciplined way and allow myself to embrace the opportunity to be creative with change and making changes.  I will work with change instead of running from it.

I commit myself to no longer allowing 'What If ...' thoughts to influence, direct and/or control my decisions or things about myself and living that I would like to change.

I commit myself to stopping myself from going into anger and frustration when things aren't going as I would like, hoped, and/or expected by when and as I see that things aren't going as I would have liked, how I would have hoped, or how I had expected, I stop and breath.  I self-forgive the information and emotions coming up and then re-direct myself to take a self-honest look at my self-expectations and what would be cool for me to live - as this is what is really required to be sorted out and worked on.

I commit myself to stopping myself from having temper tantrums by when and as the urge comes up to physically release all of my accumulated anger and frustration, I stop, I breath, I remove myself from the situation, continue to breath and be here until stable.  When and as the energy has dissipated, I self-forgive.  Here, I see, realize, and understand that my starting point with stopping and changing acting out temper tantrums is to NOT DO IT.

I commit myself to changing my responses by when and as I see myself expressing with words and behaviors that aren't cool, I look for what it is that I am attempting to express and for ways that I can express them in way that is not suppressing.  Here I utilize the tools of self-forgiveness and redefining myself.

I commit myself to utilize the moments that I become Miserable or Dissatisfied to look at where I have become miserable and dissatisfied with self and look at what it is that I can change about myself for self-fulfillment and self-satisfaction.